The opening comment of an “On Being” podcast made me stop mid-step. I’d clicked on an episode to listen while walking on a busy city street without paying much attention to who was being interviewed. Host Krista Tippett’s introduction sent me reaching for the volume button on my phone and adjusting my earbuds so I wouldn’t miss a word.

“Oceanographer Sylvia Earle was the first person to walk solo on the bottom of the sea, under a quarter mile of water.” 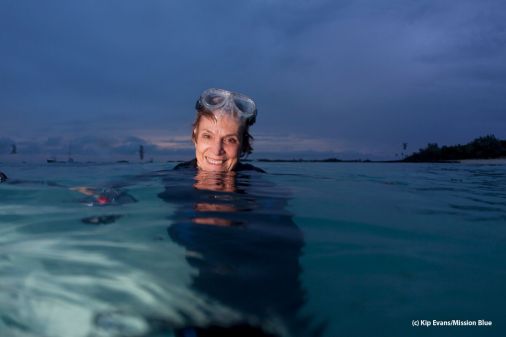 In 1964, while a graduate student at Duke, Earle was invited to join a team of 70 men on a six-week expedition to the Indian Ocean. Fifteen years later, she took that historic walk, the deepest dive ever done without a tether to the surface. It’s a record Earle still holds, and that feat earned her the title of “Her Deepness.”

In a New Yorker profile in 1989, Earle spoke about the impact of being one of the first marine scientists to use scuba equipment to explore the ocean. “It caused me to think very hard about how I could convey something about the animals and plants in the ocean—the system which actually dominates our planet. Now we have been able to see, first of all, that the ocean is alive.” 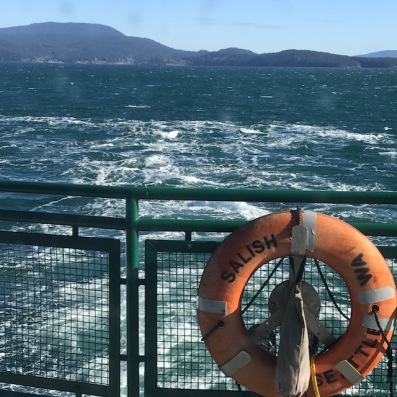 As the interisland ferry cuts through the surface of the Salish Sea during my writing time, I try to remember what Earle’s experience has shown her. “It’s not just water… It’s a living system, every spoonful that you look at. We think of life in the sea in terms of fish and whales and coral reefs and the like, but most of the action is very small, microscopic and submicroscopic.”

Much of the ocean is dark, all the time, and Earle has spent thousands of hours over the past sixty years in those deep places the sun never gets. She estimates that only bout five percent of the ocean has even been seen, let alone explored. This new frontier, she says, is “in trouble, and that means we’re in trouble, and we know so little about the ocean.”

In her 2018 interview with Tippett, Earle explained that saving the ocean is her life. That’s been true for at least thirty years. Here she is again in 1989. “Increasingly, I had come to realize that I had to speak out about the irreversible damage we are doing to the world we live in. I mean, we’re ripping through our resources at an alarming rate, consuming and not giving back, chewing up forests for lumber and newsprint and not sustaining those forests, using freshwater resources without sustaining our rivers and lakes, wreaking havoc on our coastlines and the entire ocean system. And it has been estimated that we are losing ten thousand species a year—plants, insects, birds, fish, mammals, microörganisms—many of them before we even know they exist.”

Last summer’s death of an orca calf held the world’s attention for the seventeen days and 1,000 miles the calf’s mother, Tahlequah, carried her dead baby. That drama likely convinced large numbers of people that the Salish Sea is in trouble. The “ripping through our resources …consuming and not giving back” Earle describes has diminished food supplies (Chinook salmon in particular) for the orcas, shortening their lives and making reproduction and survival more tenuous. Oil tankers and other water vessels (including whale watching boats and ferries) cause noise that interferes with sounds whales need for communication and echolocation. Finally, toxins from oil spills, chemical contaminants, and plastics foul the water and food so vital to these mammals.

I don’t expect I’ll ever live underwater, but the longer I ride and write on the Salish Sea, watch its tides ebb and flow, the more interconnected I feel with this system that dominates the world. And the more compelled I am to tell its story to help us all feel it—and take whatever actions we can to save it.

I still have much to learn about the places where the sun never gets, and I’m grateful for teachers like Sylvia Earle. You can learn from her in this TED talk.

Next on my research list is to watch “Mission Blue,” the Netflix documentary about her and her mission to teach people about the dire condition of the Earth’s oceans.

8 comments on “Where the Sun Never Gets”